You are in a modal window. Press the escape key to exit.

Office of the President 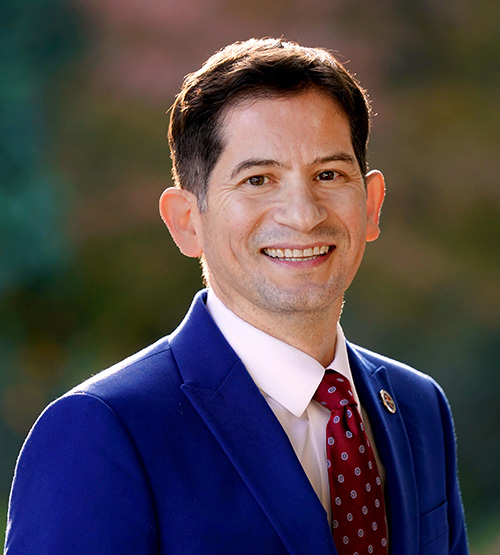 Saúl Jiménez-Sandoval has roots in Fowler, a city 15 minutes south of Fresno, and his commitment to the region and higher education form part of his personal mission to promote the region’s economic and cultural ascendency. Dr. Jiménez-Sandoval is an immigrant to the San Joaquin Valley, having arrived in the region from Mexico as a 10-year-old. He worked in his father’s small farm, and grew to appreciate the many cultures, languages and communities of the Valley.

Prior to his administrative appointments, Dr. Jiménez-Sandoval taught at Fresno State for almost 15 years. His area of expertise is Spanish and Portuguese poetry, and he has published on authors from Cuba, Mexico, Spain and Portugal. His commitment to student success is evident in his successful direction of 30 M.A. theses and numerous M.A. projects (only four Spanish M.A. theses and projects had been completed prior to his arrival). Dr. Jiménez-Sandoval has a deep faith in the potential of our gifted students, and works tirelessly to promote their growth and success.

Dr. Jiménez-Sandoval is most inspired by Fresno State’s power to transform the individual in ways that promote their unique skills and talents and encourage their bold contributions to the greater good. He is proud of Fresno State’s status as a national leader in recruiting, supporting and graduating students from diverse backgrounds. In 2020, Fresno State was ranked No. 26 in the nation by Washington Monthly, and has been recognized by U.S. News and World Report as one of the top three best public national universities for graduation-rate performance five years in a row. Fresno State was also ranked No. 40 in Money Magazine’s Best Public Colleges, and No. 7 for Most Transformative College, because it is a school, “where students beat the odds by doing better than would be expected from their academic and economic backgrounds.”

Dr. Jiménez-Sandoval served as Dean of Arts and Humanities before his appointment as Provost and Vice President of Academic Affairs in 2019. One of his first unique steps as Provost was to undertake visits with every academic department on campus during his first year. Meeting most of the faculty and staff at Fresno State has provided Dr. Jiménez-Sandoval with a sense of the history of the disciplines, as well as an appreciation for current initiatives and research. This awareness constitutes a solid foundation of envisioning the next level of academic excellence at Fresno State.

Dr. Jiménez-Sandoval takes mentoring of campus leaders personally, and has engaged in mentoring, through established programs and informally, for aspiring leaders from every College and School at Fresno State.

Dr. Jiménez-Sandoval’s leadership has been recognized in various ways. He serves on a number of boards, including the Mountain West Athletic Conference Board, University High (Fresno) Board of Directors and California Teaching Fellows Foundation. He received the Horizon Excellence in the Arts Award by the Fresno Art Council in 2019, was inducted into the Phi Kappa Phi honor society in 2016, and, as a faculty member, received the Provost’s Award for Graduate Teaching and Mentoring in 2012-13.

Dr. Jiménez-Sandoval is committed to the Central Valley region, and is proud that all of his academic career has been invested in promoting the enrichment of our students and region. With deep roots in the Valley and a strong connection to agriculture and the arts, he is committed to Fresno State and the valley community. He and his wife, Dr. Mariana Anagnostopoulos, happily make Fresno their home with their two sons, Arion and Leo.